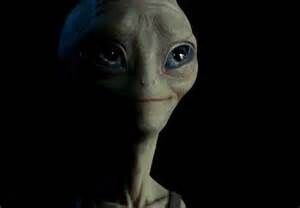 Simon Pegg
Nick Frost
This unnamed humanoid species are a rare that live somewhere among the Andromeda Galaxy. Although it's never mentioned what they are exactly, however it's implied that they might be Greys, or at least another kind of alien that resembles, or might even be related to them.

These aliens are around half-size of humans with light grey skin, two nostril openings for noses and have a large head in proportions to the rest of their bodies. Unlike most greys, their eyes are more human-like.

They can turn themselves invisible somewhat like Yautja but only when holding their breath as well, transfer knowledge to others by direct touch. They're also able to heal and even bring any dead creature back to life however according to Paul, doing that bounces damage on to them.

Retrieved from "https://aliens.fandom.com/wiki/Paul%27s_Species?oldid=184607"
Community content is available under CC-BY-SA unless otherwise noted.