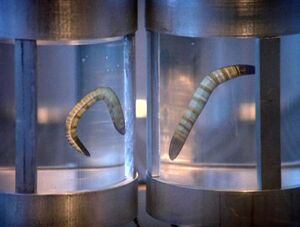 The X-Files
The "parasitic ice worms" are leech-like creatures with an ammonia-based metabolism and probably extraterrestrial origins. They are believed to have come to Earth in a meteor that fell in Alaska about 250 thousand years ago; remaining dormant under the thick ice sheet until 1993, when a group of scientists brought them back to the surface along with deep ice samples and became infected.

After infecting a host, the worms settle in the hypothalamus and proceed to feed on the host's acetylcholine, affecting the host's self-control and causing extremely aggressive behavior. Removing the worm will result in the immediate death of the host. The worms reproduce asexually and are highly territorial, unable to tolerate the presence of other members of their species in the same host. Therefore, introducing a second worm in the infected subject actually provides a cure, since the two worms will fight each other until both are dead.

Those originally infected with the worms ended up killing each other and committing suicide until only a dog survived. FBI agents Mulder and Scully were called alongside a team of experts to investigate the occurrence and ultimately managed to isolate the parasitic lifeforms, although they were unable to prevent two more fatalities: the plane pilot Bear, who had been infected by the dog; and Professor Murphy, who was killed by Dr. da Silva while she was also infected. After the incident the whole place was incinerated by the authorities, supposedly for health control reasons but likely to purposely destroy the evidence of extraterrestrial life.

Retrieved from "https://aliens.fandom.com/wiki/Parasitic_Ice_Worm?oldid=181409"
Community content is available under CC-BY-SA unless otherwise noted.