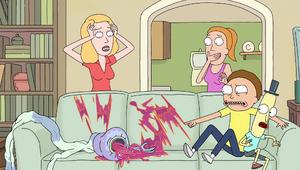 Justin Rolland
Dan Harmon
The Parasites are an unnamed race of extraterrestrial creatures that can shape-shift into any form, humans, animals, aliens or even historical figures, and are able to take the persona of them.

In its true form, an alien parasite is shown to have pink and white skin with purple blood, no eyes and has several tongues. Once they implant themselves to a person's mind, they created false memories of an invented character believe people such as a friend or family member. Soon as they have multiplied enough, they will attempt to use this to take over whatever planet their on and enslave the entire race as well.

The Parasites are a shapeshifting species which, according to Rick Sanchez, enslave other races by infiltrating their societies, assuming a form which allows them to blend in while also telepathically altering the memories of those around them, preventing anyone from noticing discrepancies in their cover stories or even anything strange about their usually nonsensical disguises.

However, their ability to fabricate false memories is limited. As theorised by Morty Smith, Parasites are incapable of creating negative memories of their personas, only positive memories. This was quickly proven by Rick and his family as they slaughtered the parasite infestation in their quarantined house, identifying who is a Parasite or not depending on if they are able to recollect any bad moments with them.

Retrieved from "https://aliens.fandom.com/wiki/Parasite_(Rick_and_Morty)?oldid=182944"
Community content is available under CC-BY-SA unless otherwise noted.