Alien Species
Register
Don't have an account?
Sign In
Advertisement
in: Descendants of Man, All Tomorrows Universe, Non-Sapient Species,
and 7 more 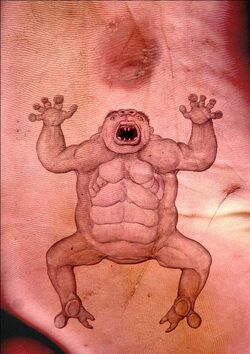 Evolved into the Symbiotes

Nemo Ramjet
The Parasites were a posthuman species created by the Qu from a colony of the Star People. They belonged in one lineage of posthuman species on their homeworld, the other being ape or Australopithecine-like primitive creatures which now served as potential hosts for these parasites.

There were many species of parasitic humans on this world, ranging from tortoise-like bloodsuckers to fist-sized creatures that live by attaching themselves to their hosts. Their hosts were always humans belonging to the Australopithecine-like lineage.

For forty million years, the Qu overlooked the world, guaranteeing the survival of the parasites so that they could punish the other humans for fighting back against the Qu invasion.

After the departure of the Qu, many parasites died out because their hosts eventually learn how to drown, burn or even eat them. One species (which is the one shown in the picture) sterilized its female hosts by living inside their wombs, dooming their hosts and themselves.

Only a few species survived by regulating their dumb hosts, not killing them by over-infestation and thus ensuring their own long-term survival as well. Eventually, one of these species evolved into the Symbiotes.