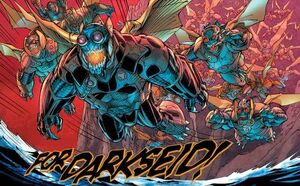 Jack Kirby
Parademons are an army of extraterrestrial beings artificially engineered by Darkseid of Apokolips, and make up his shock troops.

They don't originate as a single species, but are created from other beings (dead or alive, mostly taken from the populations of conquered worlds) who are converted into Parademons by nanotechnological implants, before being conditioned and trained by Desaad. They're extremely loyal to their masters.

In some cases, they are capable of assimilating others as well in order to increase their numbers. They're typically equipped with wings and razor-sharp claws, and possess superhuman strength and pain tolerance. 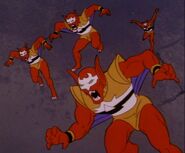 As seen in Super Friends

As seen in the DC Animated Universe 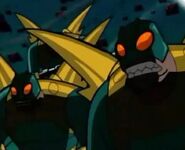 As seen in Batman: The Brave and the Bold

As seen in Superman/Batman: Apocalypse

As seen in the DC Animated Movie Universe 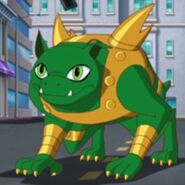 As seen in the original DC Super Hero Girls 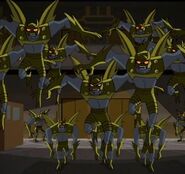 As seen in Justice League: Action

As seen in the DC Extended Universe

As seen in Young Justice
Add a photo to this gallery

Retrieved from "https://aliens.fandom.com/wiki/Parademon?oldid=185283"
Community content is available under CC-BY-SA unless otherwise noted.