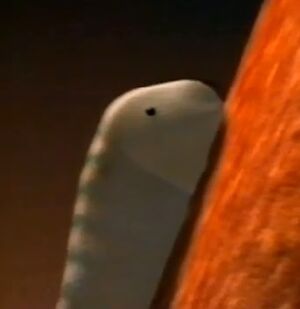 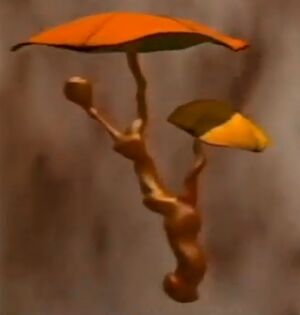 Natural History of an Alien

The Parachute Worm is a small non-sapient species native to the sulfurous world of Sulfuria, whose composition is similar to the Jovian moon of Io, and whose atmosphere is thick and noxious for Humans.

Parachute Worms spend their lives among the Sulfurian Balloon Plants, which are anchored to the ground by their stems. These can be thousands of kilometers long. The worms climb up these stems to migrate from the food-rich lower levels to the energy-rich upper levels of the Balloon forest, where they mate, and the juveniles use their natural ability to parachute to avoid the need to climb down.

Young worms attach themselves to the gas-bladders of a Balloon Plant and extract oxygen from them. When they've finished feeding, they parachute themselves to the ground. Once they fall on the shallow lakes below, they shed their parachutes and start feeding on the nutrient-rich roots of the Balloon Plants. To complete the cycle, adult worms slowly climb up the Balloon stems to mate and give birth to the next generation of their species.

Retrieved from "https://aliens.fandom.com/wiki/Parachute_Worm?oldid=182475"
Community content is available under CC-BY-SA unless otherwise noted.