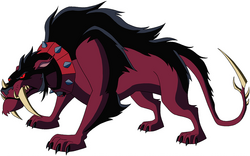 Ben 10
Panuncians are a non-sapient species from the planet Hathor, and the natural predators of Splixsons.

Panuncians resemble a mix of a wolf and a hyena, with large teeth and a horn on their noses. Their fur is black on the top side and red on the underside.

Panuncians prey on the creatures native to Hathor, but most often prey on Splixsons, to the point of being considered their natural predator.

Like Splixsons, Panuncians are able to duplicate themselves without limit.

A Panuncian's saber-like teeth can pierce through flesh with ease.

Panuncians possess enhanced hearing, and can respond to a Zaroffian's whistle.

Due to being non-sapient, Panuncians can safely use the Nemetrix without any risk of mental damage. Combined with their self-duplication, they are able to utilize every available transformation in the Nemetrix at once.

Panuncians are vulnerable to being thrown around by their trails.

Panuncians can be immobilized by exposure to water, such as that generated by an Orishan.

Panuncians are extremely determined and vicious, and can be trained as hunting dogs.