Alien Species
Register
Don't have an account?
Sign In
Advertisement
in: All Tomorrows Universe, Non-Sapient Species, Bipedal Species,
and 13 more 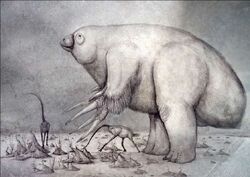 Nemo Ramjet
Panderavis pandora is an extinct species of Therizinosaur native to one of the worlds colonized by the Star People. When the fossils were found, the Star People knew that they were not the first civilization to colonize the planet, since Panderavis clearly was a descendant of Earth's dinosaurs, while all other creatures were native to the planet and had three limbs, a copper based skeletal system and hydrostatically operated muscles.

Panderavis had four limbs, and a calcium based skeleton, and used its claws to dig and find food.

Panderavis served as the first warning for the Star People that there are other space-traveling civilizations that are even capable of the genetic manipulation of organisms. They later met the Qu themselves.