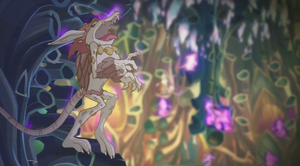 The Pandemonium Sprites are legendary creatures.

These creatures resemble large rats/mice/opossums with pangolin-like brown scales on their backs and forearms, and reddish-brown hates resembling acorns. They have long tails, dark brown eyes, and pale cream skin that is covered with yellow warts.

The Pandemonium Sprites have a very loud and high-pitched screech that can destroy anything in their path. Other than their voices, they are able to move very fast and run on walls.

According to Musa, there is a cave system called the Pandemonium Cave, a cave underground the Golden Auditorium where the sprites "live", which is filled with crystals. The sprites are mischievous creatures, whose screech can break a hundred glasses.

"Once upon a time, evil sprites were trapped in an elaborate system of caves. And every night, they try to escape."

Selina summons Pandemonium Sprites via Legendarium to "drown" the Winx with their screech. However, Musa and Tecna finds out that they must use music against them and earn their Bloomix to return them into their cave.

Retrieved from "https://aliens.fandom.com/wiki/Pandemonium_Sprite?oldid=167616"
Community content is available under CC-BY-SA unless otherwise noted.