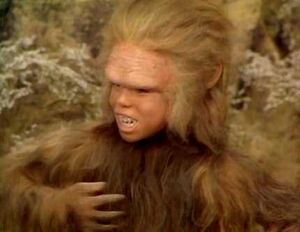 Land of the Lost
The Pakuni (singular Paku) are a race of short, fur-covered humanoids which inhabit the strange realm known as the Land of the Lost. They appear to be in a cultural and technological state of development akin to the Neolithic period of human history.

Although sometimes described as vegetarians, the Pakuni are actually shown to be omnivores, some of the things they enjoy including flowers and lizards. However they won't eat fish, and are also afraid of pigs. They also appear to consume dinosaur eggs: a rite of passage among the Pakuni includes stealing the egg from an Allosaurus nest. Their culture is highly superstitious and includes ritual dances to the three moons, and the practice of shamanism or witch-doctoring.

Retrieved from "https://aliens.fandom.com/wiki/Pakuni?oldid=115715"
Community content is available under CC-BY-SA unless otherwise noted.