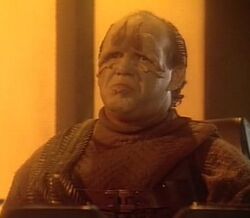 Michael Westmore
The Pakleds are a sapient, yet notoriously dim-witted humanoid race native to the Milky Way Galaxy.

Pakleds mostly operate by stealing the technology of other races, and it's been theorized that they couldn't have developed spacefaring technology on their own. The analysis that Geordi La Forge made aboard a Pakled ship has revealed that the ship was built with an amalgam of parts originating from Romulan, Klingon and Jarada tech, which the Pakleds themselves were only vaguely familiar with, to the point that even their appointed engineer often found himself unable to fix damages to the ship.

Although they try to outsmart others and do often succeed in taking advantage of other races' underestimation of their own intelligence; the Pakleds themselves are still simple-minded and thus relatively easy to deceive.