"For all intents and purposes, the pak'ma'ra are invisible. Ignored, shunned. People go to great lengths not to notice them."
―Delenn, 2262. 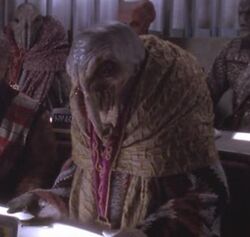 Babylon 5
The pak'ma'ra are a species of sapient, spacefaring, semi-humanoid, multi-limbed, foul smelling, venomous carrion-eating aliens and members of the League of Non-Aligned Worlds, which later converged into the Interstellar Alliance.

Contrary to the majority of species (except humans) the name "pak'ma'ra" is most often spelled in low caps; and it has been stated that that's the way they write it themselves.

The pak'ma'ra are bulky creatures which walk on multiple legs. They are recognizable by their hunchbacked posture, rough skin, widely separated eyes and three pairs of short tentacles surrounding a beaked mouth. Their mandibles can inject a nerve toxin powerful enough to knock down an Earth elephant in merely ten seconds. Furthermore, their odor is described as unpleasant. These traits, added to what is perceived as a nasty, antisocial nature and their habit of consuming carrion (including of other sapients) has caused the pak'ma'ra to be regarded as one of the most unpleasant of alien species.

These tough beings are physically strong, but are not known for fast movements. Pak'ma'ra eyesight is limited to the infrared spectrum, and thus they can distinguish temperatures, more than colors and shades. They are able to dwell in atmospheres devoid of oxygen, but whether they breathe it facultatively or don't breathe it at all remains unclear.

Their excretory system is located on the torso, and they seem to require special toilet facilities. The pak'ma'ra are asexual and reproduce by parthenogenesis and budding. Pak'ma'ra larvae are oceanic, and go through metamorphosis before moving on to land. Once terrestrial, they refuse to eat carrion from fish, but will gladly consume practically anything else. They prefer their meals to be dead for at least five days and already decaying. Like many scavenger organisms, their digestive tract is specialized for dealing with harmful pathogens and they are very resistant to disease. Their favorite beverage is called Rmm*zzq!wwx, which roughly translates as "Roadkill Malt".

Pak'ma'ra use specialized cells to produce the chemical molecules in synaptic gaps which are responsible for neurotransmission. This physiological peculiarity is only known to occur in two sapient species: the pak'ma'ra and the Markabs, with the only distinction being that in the pak'ma'ra, the cells responsible for producing the neurotransmitter molecules are called green cells, whereas the Markabs' are called yellow cells.

The pak'ma'ra homeworld is called Pak'ma, also known as Melat; and is known for its rugged terrain, rich in caves and grottoes; its large saltwater oceans and its dense atmosphere.

Despite being physically brutish, pak'ma'ra are known to be extremely intelligent, contemplative and hard-working. They usually inhabit natural structures such as caverns and prefer to live alone or in pairs. Despite this, they clump together in gregarious communities, much like the majority of sapient species; and citizens are assigned tasks by mutual agreement. Their work period is alternated with a period of rest and philosophical meditation.

The pak'ma'ra religion worships the Platonic-like concept of ideas. Pak'ma'ra believe their own race to be superior to all others, and have described themselves as the chosen of God; which only contributes to their bad image among other species. Religious rituals are rare and include ceremonies of communal singing. Often ignored in alien social settings, pak'ma'ra are considered very suited to work with infiltration and espionage.

Once believed to be telepathic, pak'ma'ra actually have a very complex idiom; and due to their unusual mouth anatomy, they are unable to communicate with alien species without a translator device. They also have no written language whatsoever (which makes the claims about them not capitalizing their names seem rather odd). Pak'ma'ra humor makes unusually frequent use of the punch line "properly cooked".

Pak'ma'ra government is unique due to individual members of the species being extremely united in some aspects and yet extremely individualist in others; so much that their political motto is "pak'ma'ra, all same, all different". They have no fixed political leaders, at least in regards to external politics, and allow any individual pak'ma'ra to act as spokesman for the entire race. However, any decision taken must be considered by all individuals concerned.

Though their society is not based on capitalism and they have no forms of currency; pak'ma'ra have been favored in interspecies trading business thanks to their rich supply of Quantum 40, an extremely rare substance which is needed for the construction of jumpgates.

The dawn of pak'ma'ra civilization is believed to have occurred around the Earth year 261; the species achieved spaceflight in 2186.

Despite considering themselves a superior species, pak'ma'ra felt curious about the influx of new ideas brought by each new species they had contact with. With the spacefaring age came a new profession called "observers": chosen pak'ma'ra were sent to live among aliens all over the galaxy to observe their ways of life and learn about their ideas. Those ideas deemed valid were slowly incorporated into pak'ma'ra culture as well.

The pak'ma'ra are members of the League of Non-Aligned Worlds and usually seem to follow the same political decisions of other minor species of the League. They have been known to incorporate technology from other species through both purchasing and scavenging. Although by no means an expansionist or hostile species, they cannot be deemed pacifists either and will fight hard to defend their territory. They do have the advantage of the rough terrain which makes invasion of their homeworld a difficult task for all but the most powerful species.