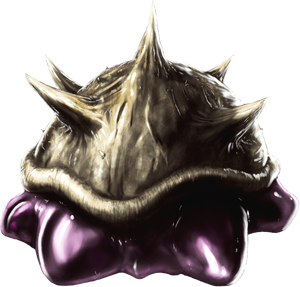 Owtchs are a species of aquatic, benthic molluskid indigenous to the subterranean lakes of Maridia, one of the planet Zebes' many sectors. They wander aimlessly around their environments, likely in search for food hidden beneath the sand, with little mind to their surroundings and can be compared to the aquatic snails of Earth. While they are capable of harming foes by a simple touch, they prefer to burrow into the sandy seafloor to escape potential predators. Their shell is fairly durable and is known to be resistant to some types of beam weaponry. It is unknown how they sense potential predators as they lack eyes, but they may be able to sense vibrations either through the soil (which they constantly keep in contact with) or the water (possibly through a means of electroreception or a lateral line).

As with all other species native to Zebes, it became extinct in the wild when Samus Aran finally destroyed the evil Mother Brain. Many were later found aboard the Biologic Space Laboratory Research Station, where they were copied by the X Parasites. If any survived X possession, these too were obliterated when the BSL was crashed into the surface of SR388.