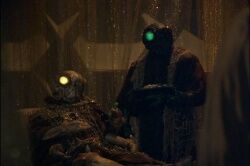 Battlestar Galactica
The Ovions are a race of insectoid sapients who were ultimately conquered by the Cylon Empire. They are enslaved and forced into an alliance alongside other races such as the Delphians and the Hasaries; collectively known as the Cylon Alliance.

Retrieved from "https://aliens.fandom.com/wiki/Ovion?oldid=165674"
Community content is available under CC-BY-SA unless otherwise noted.