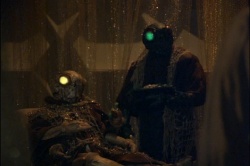 Battlestar Galactica
The Ovions are a race of insectoid sapients who were ultimately conquered by the Cylon Empire. They are enslaved and forced into the Cylon Alliance.