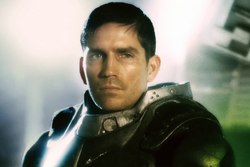 Same as a human

Outlander
The Outlanders are a race of humanoids of the Outlander Planet.

The outlanders have a tremendous thirst for lands, so they have invaded and conquered many worlds, including the Moorwen Planet, they use powerful weapons and armors fabricated with super strong metal.

It would appear that they seeded earth in some fashion, either colonizing it or initially seeding it with life. Thus quite possibly explaining the unusual similarity between humans and outlanders.

It is also interesting to note that the outlanders had considerable information concerning the Earth and its inhabitants.

An Outlander opening a flower
Community content is available under CC-BY-SA unless otherwise noted.
Advertisement