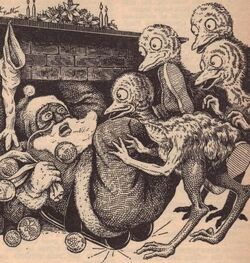 Isaac Asimov
The Ossies are the sapient native inhabitants of Ganymede and seem to have a very childlike view of the world.

Ossies are named for their vaguely ostrich-like appearance. Compared to an ostrich, however, Ossies have larger heads and shorter necks. They also have a pair of scrawny tridactyl arms in place of wings, and their feathers have been described as looking like they're about to fall off.

Being native to Ganymede, they naturally do not breathe oxygen (although they can still make fire in the Ganymedean atmosphere). They can speak a form of broken English and are known to enjoy sugar. Like Earth birds, they lay eggs.

Although Ossies are less technologically advanced than Humans, many are employed as workforce by Ganymedan Products Corporation, Inc.

On one unfortunate occasion, an employee of the Corporation named Olaf Johnson told the Ossies about Santa Claus. This inadvertently caused the childlike natives to go on strike, demanding that Santa should visit them at Christmas. Johnson was forced by his boss to impersonate Santa for the Ossies, with am improvised flying sleigh and eight Spinybacks with fake antlers posing as the reindeer.

Retrieved from "https://aliens.fandom.com/wiki/Ossie?oldid=193603"
Community content is available under CC-BY-SA unless otherwise noted.