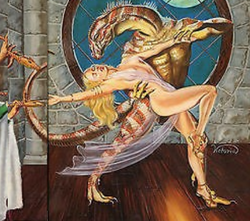 The Osirians resemble small dinosaurs, about a head taller than a human. Osirians ran about on their hind legs with its tail stuck out behind to balance. They also possess an ability that allows them to hypnotically control other species. As to how this is accomplished has yet to be explained by Terran science.

Osirians are rational people; who have developed space travel independently. Osirians are seen as rational beings, but also sentimental and capricious like humans. They have an economy that is based on capitalism.

Retrieved from "https://aliens.fandom.com/wiki/Osirian_(Viagens_Interplanetarias)?oldid=182095"
Community content is available under CC-BY-SA unless otherwise noted.