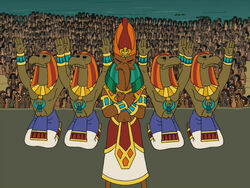 Futurama
The Osirians are a conglomerate of mostly similar-minded races whom have based their entire civilization upon that of the Ancient Egyptians of the planet Earth.

They are made up of the High Priests, Slaves and Higher class workers. The Higher Class and Priests enjoy a life of luxury while the Slaves work day and night. The Osirians are ruled by a pharaoh which Bender once became. A new Pharaoh is chosen by looking at the Wall of Prophecy. Those native to the planet appear to be either Human or species based on Anubis and Thoth.

In Osirian culture, whenever a pharaoh dies, he is mummified and his mummy is buried along his most prized possessions, as well as bags filled with live cats, which Osirians consider sacred. Performers who sing at the burial ceremony is also thrown into the deceased Pharaoh's tomb.

The Thothan Osirians are avian, ibis-headed humanoids, possessing long, downcurved bills and black eyes. They are named after the Egyptian god Thoth, in which they bear a striking resemblance to. Despite being avian, they appear to lack feathers throughout most of their bodies, with their feathers mainly situated on their heads. Like other Osirian species, they have dark skin due to constant exposure to the sun. Being avian, it is possible that the Thothans are oviparous (egg-laying).

The Annubite Osirians are canine humanoids that resemble jackals. They are named after Anubis, the Egyptian god of death. Much like the Thothans, their bodies mostly lack integument, and have dark skin. Most Annubites appear to have long, black dreadlocks.

Human Osirians, hence their name, are a race of humans "native" to Osiris 4 that have assimilated themselves into Osirian culture. Much like the Thothans and Annubites, they have dark skin due to constant sun exposure.

The Human Osirians have two professions: Slave and Slave Commander (although the pharaoh may be a human).