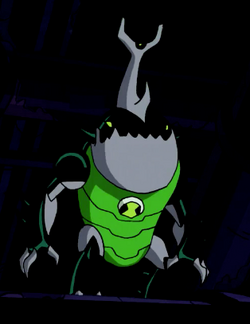 Ben 10
Oryctini are a race of voracious humanoid insect-like aliens from the planet Coleop Terra.[1]

Two distinct types of Oryctini have been observed. The first type are 10 ft (~ 3.04 meters) tall[1] robotic humanoids with dark blueish-purple skin, long horns, and large, metallic mouths that spread over part of their chests.

The second type of Oryctini are more insect-like, and have forks at the top of their horns that are similar to those of Japanese rhinoceros beetles.

Although they traditionally have gray, green, and dark green skin, insectoid Oryctini can come in other colors. For example, Negative Eatle has reddish-grey, red, and dark red skin.

Oryctini are preyed on by an unnamed frog-like species.[2]

In addition to shooting lasers, an Oryctini's horn can be used as a very effective battering ram.

Oryctini possess enhanced strength and sharp claws, and can climb up structures.

The robotic Oryctini seem to have a blind spot due to their eye placement, making it easy for enemies such as a Chimera Sui Generis to sneak up on them. However, the insectoid Oryctini do not have this weakness due to having a different eye placement.

Similar to Gourmands, there is a limit to how much solid matter Oryctini can consume. They may also unaccountably try to eat against their interests.

An Oryctini's weight can have a negative effect on an environment other than their home planet.

Oryctini cannot eat materials such as Kryptonite because it is not particularly hearty and just radioactive.[2]

Albedo as Eatle
Add a photo to this gallery

Retrieved from "https://aliens.fandom.com/wiki/Oryctini?oldid=189315"
Community content is available under CC-BY-SA unless otherwise noted.