"Ornithoid Lifeforms" is a designation used to refer to a mysterious sapient species of diminutive beings native to a galaxy other than the Milky Way. The two individuals discovered on the planet Pyris VII were exploring the Milky Way, under the orders of a superior power which they refer to as the "Old Ones", whose exact nature is never made clear.

These aliens are enormously advanced and experience physical sensations differently from Humans, due to radical differences of the environmental conditions under which each species evolved. They also aren't physically suitable for surviving on Earth-like environment in their true forms.

In their natural form they resemble a strange kind of bipedal insect with fluff-like blue fur covering their bodies. Their heads sport tentacles and antennae. They are rather small creatures (less than a foot tall) and their fragile bodies easily die under Human-suitable environments. When they perish, their bodies quickly break down, with smoke coming out of them, suggesting that their tissues are vaporizing.

Their technology is based around the transmuter: a crystalline device which allows them to highly amplify their natural mental abilities, giving them the powers to travel between galaxies, to read and control minds, to exert control over matter over vast distances, and to alter their bodies in order to achieve a form most appropriate for the environment they find themselves in. In short: the transmuter allows them practically unlimited control over mind and matter.

Two members of this species, Korob and Sylvia, traveled to the Milky Way in a mission, apparently sent by the so-called Old Ones, and established themselves on the planet Pyris VII, where they made contact with three crewmembers of the USS Enterprise: Scotty, Sulu and Jackson; who had been sent on an away mission on the planet. The Ornithoid Aliens probed the minds of the men and created a scenario using of the subconscious images they found, mistaking Human folklore and cultural impressions for a realistic sample of their environment. The result was a dark, eerie fog-covered area surrounding a haunted castle with spectral witches, black cats and skeletons, and other strange phenomena.

This first contact ended in disaster, with Scotty and Sulu being held captive and having their minds controlled by the aliens, while Jackson escaped and beamed up to the Enterprise, already insane, only to collapse and die upon reaching the ship. Following this, Captain Kirk, Spock and Dr. McCoy decided to beam down to the planet to investigate, and met with the two aliens. Soon, McCoy was also hypnotized.

As Kirk finds out, Korob and Sylvia were having severe disagreements over how to proceed: the former claiming loyalty to the Old Ones and wishing to move on with their mission (the exact nature and purpose of which is never made clear), while the latter took pleasure in the new sensations provided by the humanoid form and wished to remain there. She later proposes to Kirk that he joins her and that they get rid of Korob and steal his transmuter. Kirk refuses, and Sylvia gets dangerously mad, creating a giant black cat to attack Kirk and the others. Korob is killed, but Kirk manages to salvage his transmuter and shatters it, nullifying all previous effects. The planet is back to normal, so are McCoy, Scotty and Sulu. Korob and Sylvia revert to their original Ornithoid bodies and dissolve. 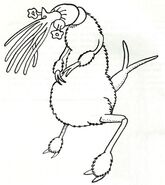 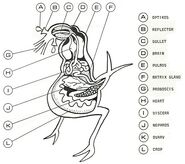 Internal anatomy
Add a photo to this gallery

No proper name was given to refer to this species in their episode. The name "Ornithoid Aliens" and the diagrams detailing their anatomy above originate from the Starfleet Medical Reference Manual, in which these creatures are classified as vita xenos: a denomination used to refer to extra-galactic species (also including for instance the Kelvans and the Blastoneurons). The Manual also claims that these aliens hail from a cold, dry planet, with gravitational pull equaling one sixth of Earth's and a low atmospheric pressure. It further elaborates that the straw-like mouth and simple digestive system indicates that the species is probably liquivorous.

Retrieved from "https://aliens.fandom.com/wiki/Ornithoid_Lifeform?oldid=180745"
Community content is available under CC-BY-SA unless otherwise noted.