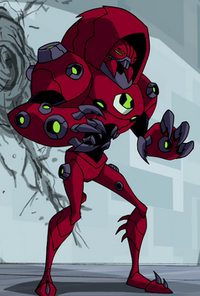 Ben 10
Orishan are a race of naturally-armored molluscan humanoids from Kiusana, a desert planet in the Andromeda Galaxy.[1]

Orishan are a red humanoid mollusk-like species with either two large eyes or four splitted eyes, small grey spikes and black spots on the back of their legs and shoulders, port holes on their four fingered hands, and what appear to be hoods covering their heads.

Through the holes in the palms of both hands, Orishan can blast high pressure streams of water. Similarly, they can absorb moisture from the air using those same holes.

Orishan have a great degree of enhanced durability thanks to their exoskeletons, which protect them from physical damage.

Orishan have a degree of hydrokinesis, being able to manipulate different sources of water, including normal Earth water,[2] into various shapes.

Similar to Kinecelerans, Orishan have retractable visors hidden under their hood-like coverings. Their hoods are also retractable.[3]

Despite hailing from a desert planet, Orishan can breathe underwater.[4]

Orishan are immune to gases, such as the fog generated by a Buglizard.

Orishan can produce water whips for close combat, and generate protective bubble shields around themselves using their water for extra defense.

Though nigh-impervious to physical damage, there is a limit to the durability of an Orishan's exoskeleton.

Orishan are vulnerable to intense heat and energy-based attacks, such as those generated by a Prypiatosian-B.

Orishan cannot walk on slippery surfaces, such as a Polymorph's slime.

Orishan can be immobilized in ice, such as a Necrofriggian's ice breath.

Despite their combat skills, Orishan can easily be defeated by a Revonnahgander with the same power level as Kundo.

Orishan are treated with great respect from the other beings on Kiusana for having the ability to produce water. This is why there are many statues and carvings of them.[1]

Orishan glass is known to be the best at adapting to multiple atmospheres. 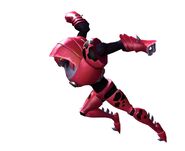 Bivalvan
Add a photo to this gallery

Retrieved from "https://aliens.fandom.com/wiki/Orishan?oldid=189534"
Community content is available under CC-BY-SA unless otherwise noted.