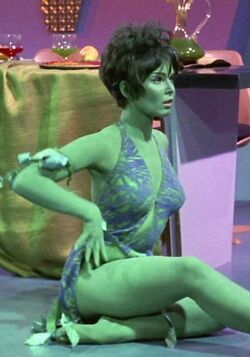 Star Trek
The Orions are a green-skinned humanoid species native, as their name indicates, to the Orion constellation. Their external appearance is similar to Humans, except for the skin color, which can range from pale to dark green and, in some cases, greenish blue.

Orion females are known through the galaxy for their beauty and for releasing strong pheromones which make their attraction particularly hard to resist. In at least some occasions, the Orions have been able to take advantage of this to persuade others to do what they want. Orions are a cunning, dangerous and opportunistic species, frequently found involved with conspiracy, piracy and slavery of other species as well as their own. Up until the 23rd century, they tried hard to hide their criminal activities and present themselves as politically neutral. Orion pirates would go to the extreme of committing both murder and suicide in order to maintain the faux image of neutrality of their species.

This apparently changed after the failed incidents on way to the Babel Conference in "Journey to Babel", in which an Orion spy masquerading as an Andorian murdered the Tellarite ambassador in an attempt to prevent Coridan from joining the Federation; so that the Orions could continue to commercially exploit that planet. Decades later, the illegal activities of the Orions had become well known, and the Orion Syndicate was openly acknowledged as one of the most powerful and feared criminal organizations in the Quadrant. Dialogue from a few episodes (e.g. TOS - "What Are Little Girls Made Of"; TAS - "Yesteryear") appears to suggest that the Orion civilization was (possibly still is) a prosperous, scientifically advanced society.

It is further possible that, at least in the scientific field they have a nice relationship with other species; since an episode of Voyager makes mention of the Orion Institute of Cosmology which accepts Human students. At least for the 22nd century, the Orions operated in an area of space adjacent to the Klingon Empire.

In the mirror universe, they were one of the species conquered by the Terran Empire. In the alternative timeline introduced in J. J. Abrams' Star Trek quasi-reboot film it appears that Orions have somehow become members of the Federation.

A pair of male Orion pirates.

Vina taking the form of an "Orion slave girl".

Gaila, an Orion who served in Starfleet

Non-canonical works set in the Star Trek universe have greatly expanded what is known about the Orion race, making such interesting claims as to the existence of several other color varieties other than green; the idea that the Orions would often absorb other humanoid species with their own within a single government; that Orion blood could be either orange or green and copper-based much like that of Vulcans; and that their cells contain chlorophyll (indicating that they either are or evolved from phototrophic lifeforms) and are able to absorb light in the ultraviolet spectrum, which is consistent with the most well known stars in the Orion Belt being huge blue stars which emit highly energetic radiation.