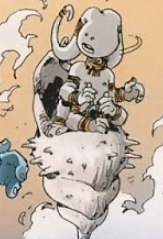 Millennia old molluscan creatures with a shell that is near indestructible. Hermaphrodites they are capable of levitating and possessing three sets of arms.

Known for their knowledge and wisdom. They are a rare species with eleven only known to still exist and are highly sought by many races of the galaxy.

Retrieved from "https://aliens.fandom.com/wiki/Orgnobi?oldid=181673"
Community content is available under CC-BY-SA unless otherwise noted.