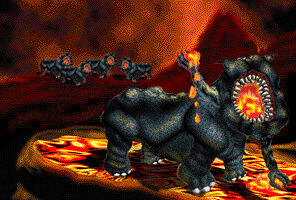 The Orfa are grazing animals that evolved on a hostile world. Their bodies are very dense and tough, and they are as happy in a pool of lava as pigs are in a wallow of filth. They prefer vegetation and a diet of complex organic molecules but they can subsist on raw minerals. They are not harmed by the radiation, heat, cold, chemicals, or physical buffeting of any known planetary body, nor do they require an atmosphere.

They have no known natural enemies (nothing on their home world is able to make a dent in their impregnable hides) and no particular difficulty surviving in almost any environment. It is likely that they evolved sapience due to competition for mating. They have seventeen sexes, so finding sixteen mates of the appropriate sex (so they can have one of their litters, numbering in the hundreds) is their central preoccupation. They have unbelievably complicated and difficult cultural mores centering around mating competition, and an Orfa who mates successfully usually gets to do so by outsmarting many of its peers. Thus they are very intelligent and are able to perceive subtle causes of events and fine levels of meaning. They are also happy to loaf once they have fulfilled their mating imperative.

You have been chosen by all Orfa to implement The Plan. The Rituals of Reproduction have gotten out of hand. The Orfa need new worlds to live on with plenty of grazing land and a decent chance to mate before growing old. The first phase of The Plan calls for the construction of vehicles that can cross the inky vastness between the stars.

Those of the Orfa who study the stars have no doubt that there are other beings in the galaxy who have intelligence and technology. Theory holds that some of the races from other worlds will have an inherent need to control the existence of others through physical coercion. Guard against such beings.

Black Square Dwellers: The Orfa are unfazed by hostile environments. You can build on black planet squares.

Retrieved from "https://aliens.fandom.com/wiki/Orfa?oldid=163730"
Community content is available under CC-BY-SA unless otherwise noted.