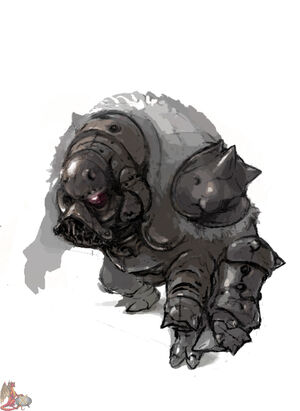 Orcs are a race of beastmen living on the planet Vana'diel.

Orcs are large, lumbering, dim-witted beastmen.They usually possess a pale green or brown complexion, have white or yellow eyes, and no nose. They are fairly reptilian in appearance; they almost resemble the common salamander. However no link in these two creatures has been documented.

Orcs inhabit many places on Vana'diel, but the largest concentration of them lies in the region of San d'Oria, staking claim in Davoi (formerly La Vaule) and Ghelsba. The Orcs are a tribal people, with a hierarchy based on strength and combat ability. Many Orcs take up arms as melee fighters, with a select few becoming magical shaman. The Orcs are very primitive and only use steel in weapons.

The Orcs continue to do battle with the enlightened races as part of the Crystal War.

Retrieved from "https://aliens.fandom.com/wiki/Orc_(Final_Fantasy_XI)?oldid=173553"
Community content is available under CC-BY-SA unless otherwise noted.