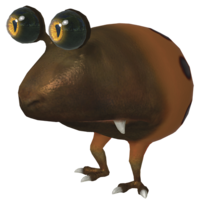 Pikmin Universe
The Orange Bulborb is a indigenous species of Grub-Dog found on PNF-404 during explorations after Captain Olimar's first initial visit to the planet.

As the name suggests, Orange Bulborbs have a garish pattern of orange bodies with black spots, and brown feet and heads. Their eyes are also black with orange irises and triangular pupils. Apart from these features, they look just like other Bulborbs.

Orange Bulborbs, while not as aggressive as Hairy Bulborbs, are indeed more "edgy and high-strung" than its red cousin, more prone to snapping awake from a deep sleep than other members of its family. They are almost always seen with Dwarf Bulborbs nearby, perhaps due to protection and an early warning system.

Retrieved from "https://aliens.fandom.com/wiki/Orange_Bulborb?oldid=169585"
Community content is available under CC-BY-SA unless otherwise noted.