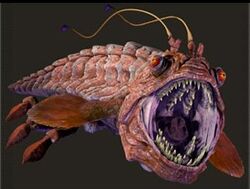 They're usually found crawling on the seafloor on their six crustacean-like legs. They also have a pair of fins. Their body is covered in armor and they have a large teeth-filled mouth, red eyes and very long antennae used as lures to attract prey. The Opee Sea Killer can capture swimming prey using its purple, extrudable, chameleon-like prehensile tongue. When they need to swim, they can use jet propulsion, sucking the sea water into their mouth and releasing it from pores beneath their body armor. They are preyed upon by even larger sea creatures, such as the Sando Aqua Monster.

During the time of the Invasion of Naboo, an Opee Sea Killer was clinging to a rock when it spotted the tribubble bongo used by Obi-Wan Kenobi, Qui-Gon Jinn, and Jar Jar Binks (who referred to it as a "big gooberfish") to reach the city of Theed. It came slowly off the rock and stealthily pursued the submersibe, using its jet propulsion to catch up. The bongo turned to the left, but the Opee jerked backwards as its eyes bouncing and threw out its purple prehensile tongue at its prey. The Opee's tongue flew at the bongo, making squelching sounds before grabbing and gripping it so it couldn't escape. The Opee roared as it pulled the bongo into its mouth with its tongue and bit the bongo hard. The bongo turned left and right but the Opee just held on with both its jaws and tongue. As it was feasting, the massive Sando Aqua Monster appeared and bit the Opee, causing it to release its prey. The Opee roared as its tongue swung in different directions and tried to escape. The Sando then stood up on its legs and grabbed the fish in its claw and brutally tore it in half with a loud crack. With the fish dead, the monster devoured both halves of it.