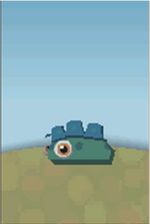 Tapti (Presumed, although found throughout the galaxy)

Oogies possess the talent to evolve quite rapidly, which are often kept as favored pets by many sapient species, most commonly by warrior societies - a common name for these pets is Mister Jiggers. Due to this, they are said to be the link between creatures and Sporelings. The dreaded Oogie Fever is known to be spread by this species. A yellow-hued, striped subspecies of Oogie are also known to exist.