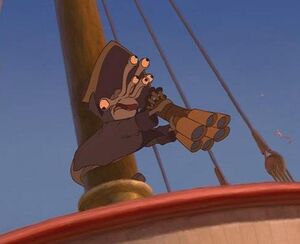 Onus was a crew member of the ship RLS Legacy in its voyage to search for the legendary Treasure Planet. While acting as the ship's lookout, he was also secretly a member of Long John Silver's pirate crew and participated on the mutiny after arriving on the mystical planet.

Onus belongs to an unknown alien species, similar to a slug with stubby arms, a wide mouth and three pairs of long retractable eyestalks with a wide range of movement making him perfect for the position of lookout.

After the battle for Flint's treasure and the activation of the ancient trap which causes the entire planet to explode. Onus is finally arrested along with Krailoni, Hedley, Torrance, and Grewnge and presumably brought to trial.

Retrieved from "https://aliens.fandom.com/wiki/Onus?oldid=156224"
Community content is available under CC-BY-SA unless otherwise noted.