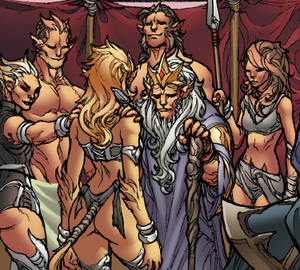 The Ontinae are a sapient humanoid mammalian species.

The Ontinae resemble humanoid tailed felines, mostly reminiscent of lions. They have tan fur, and hair mostly in shades of dark brown to light blonde.

The Ontinae were originally wandering nomads tribes, however they have since then started gathering in large numbers in a city of their own called Breene. They have a strong sense of loyalty towards others of their kind. They are ruled by King Nordak.

Retrieved from "https://aliens.fandom.com/wiki/Ontinae?oldid=161200"
Community content is available under CC-BY-SA unless otherwise noted.