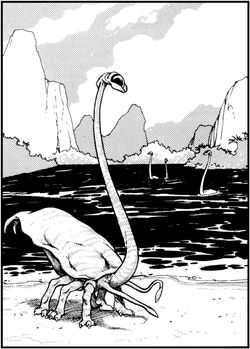 Onahks are hexapodal creatures, with each foot having adapted clawed toes for clambering about on land and retractable webbing for use during swimming. Their most noticeable feature is their long necks, which can extend to a full 2 meters in length or retract to a mere 30 centimeters.

Their sensory organs include a sensitive eye on the end of their neck as well as taste/smell bulbs located on two anterior-facing "long stalks" and two posterior-facing "short stalks". Their mouths are located on their underside.

While primarily water-breathers, they can breathe air for up to five minutes at any given time, and are as agile on land as they are in water. Their primary food during the summer months are small birds and reptiles, while in the winter they move on to a more aquatic lifestyle, where they retract their necks to fend against the cold and hunt down fish and quolers.

Onahks are highly social creatures, traveling and hunting in small pods consisting of between two and eight adults and their cubs. Amazingly, they are known to defend other members of their pods, even if it means the defender's own demise.

Though typically fearful of creatures too large for them to prey on, some onahk cubs were curious enough to follow Human colonists when they began to settle Osirrag's wildernesses. These were soon taken in, with some settlers choosing to domesticate them for their meat, while others found that they made loyal and intelligent pets.

Retrieved from "https://aliens.fandom.com/wiki/Onahk?oldid=180967"
Community content is available under CC-BY-SA unless otherwise noted.