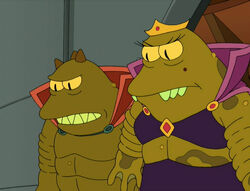 Futurama
Omicronians are a violent, aggressive race in a way similar to humanity, from the desert planet Omicron Persei VIII.

They are generally around 8 feet tall, and sport characteristics typically associated with reptiles. They are significantly stronger than a human, and appear to be opportunistic predators; they display the amazing capability to swallow very large objects, including people and orangutans, whole. Skin color can range from a greenish-yellow to a dark brown, although their eyes are always yellow with oval pupils. They seem to have a testy personality, and will often act disproportionately to even the slightest disturbance or irritant.

They are large bulky reptiles with sharp teeth and three fingers on each hand. Male Omicronians have three short horns on the tops of their heads.

Omicronians begin their lives in an immature, larval stage, known to humanity as Popplers. These are nowhere near their home planet, as these larvae are placed in large pits by the billions on Type M nursery planets, where they are watched over by Nanny-Cam satellites . Once mature, they immediately become sapient, somehow instinctively knowing how to speak upon reaching this stage of development. It is speculated that Omicronian parents are not involved in poppler upbringing, likely because the younger generation consumes their mothers (and potentially males, as well).

Because of their misfortune of resembling Earth's fried shrimp, they were tasted and discovered to be addictively delicious, becaming a massive food fad on Earth, under the Popplers brand name (which is why the larvae are known thusly). Distributed by Fishy Joe's fast food franchises, the consumption of these larvae spelled potential disaster for the Omicronian people, who demanded justice. Luckily, mankind stopped eating the larvae once they realized what exactly who they were placing in their mouths.

At some point after adulthood and subsequently sexual maturity, they attempt to mate. The act of reproduction for the species is apparently highly dangerous, and all others must remain outside of the 500 meter radius "danger zone".

Omicronian technology is many years ahead of mankind's. Not only do they possess the secret of immortality, but their war machine is one of the chief threats of the Earth defensive force, DOOP.

Despite their apparent hatred for mankind, Omicronians are fans of 20th Century television, particularly the programming of the FOX Network. As their homeworld is 1,000 light years from Earth, it takes 1,000 years for the radio waves to reach them. Due to this, they are known to actively watch the television show Friends "live" in the year 3,000 A.D.

At least some members of the Omicronian race are superstitious, including their ruler, Lrrr. One widespread belief amongst their people is that the human nose - known to them as Humanhorn - is a strong aphrodisiac.