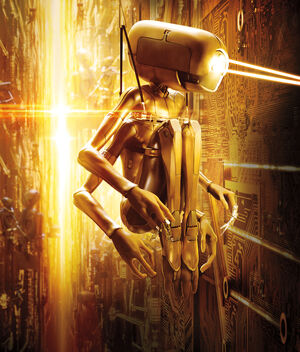 Luc Besson
The Omelites are a race of biomechanical aliens currently residing on the east of Alpha where they work on information technology, financing and banking.

As the seventh species to board the Alpha space station, the Omelites possess many characteristics commonly associated with computing technology. An example of this is their IT-based society and how their language resembles that of human binary. They also have the ability to "reboot" themselves every 50 Earth-years, making them technically immortal. However when they do reboot there are notable changes in personality that may occur.

How the Omelites gained their biomechanical nature is a result of photon storm activity buffeting their home planet Of`posco, which influenced their physiology thus leading to the mixture of organic cells with metallic ions present in their bodies. They are able to use the electromagnetic atmosphere created by these storms to communicate universally via transmitter waves. The Omelites can also manipulate the electromagnetic waves within their bodies to emit highly concentrated and accurate laser beams from their three eyes. Every decade on Of`posco, the Omelites hold planet-wide caucuses to elect a new leader; when appointed this leader will reign for ten years, during which time they are not allowed to reboot so as to prevent personality alteration.

Retrieved from "https://aliens.fandom.com/wiki/Omelite?oldid=163160"
Community content is available under CC-BY-SA unless otherwise noted.