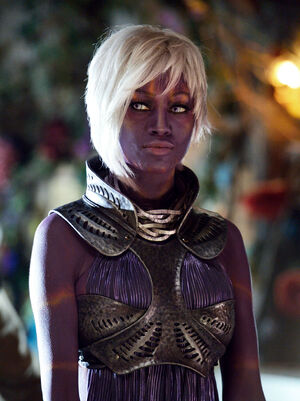 Defiance
The Omecs are a sapient race of purple-skinned humanoids native to the eponymous planet located in the Votanis system. They are feared by the other Votan races, as the Omecs were known to periodically raid their system neighbors' planets and abduct subjects to be used as slaves and even as food. The Omec homeworld was later conquered by the Volge.

Only one Omec colonization ship is known to have survived following the destruction of their home system.

The Omec have purple skin, white or grey hair and long eyebrow hairs. They have a second skin, or zekbatsin, which is a vestige from their past where they open their mouths wide and produce a second set of teeth with retractable fangs in order to feed. The Omec prefer eating their victims alive and will not consume anything that has died or even been wounded or is diseased, as they can become sick from eating diseased flesh and prefer to be able to hunt what they eat. They are very strong and resilient, capable of receiving injuries that would be fatal to other races such as damage to their brains. Omec are immune to most poisons and with age they develop a greater immunity to lethal substances.

Groups of Omec are ruled over by an alpha, or liazaaz, who is typically older and stronger than most. When an alpha dies, the Gapoliraaz Ritual is undertaken by a new alpha where they eat the heart of their predecessor and actually become stronger themselves. The Omec believe in an afterlife that takes places in a clearing of a forest or jungle and the Gapoliraaz Ritual symbolizes the old alpha being taken to the edge of the clearing by the new alpha; the new alpha is symbolized as being taken to the edge and back and being a worthy leader. Using their second skin when combating one another is banned and believed to be uncivilized and eating Omec is an unspeakable act.

The Omec's society revolved around their Dread Harvests and their control of the Votan races. They used to treat their favorite slaves as pets who would live a life of luxury with their Omec master; believing death by natural causes to be dishonorable the Omec would eat their slaves when they got too old or sick. During their raids of other worlds, the Omec would ensure that any of their wounded would not be left behind thus allowing their enemies to discover any potential weaknesses. The Omec have an open view of sexuality, like the Castithans as well as sharing similar tastes in art and music with them.

Omec evolved from a four-legged predatory creature on the planet Omec. The Omec developed technology before the other Votans and ventured out into the Votanis System where they came across the other Votan races and began harvesting them as slaves, sexual playthings and food. Every 76 years when the planet Omec came into range of the other Votan worlds, the Omec took their Harvesters and took part in the Dread Harvest where they took thousands of Votans. After many harvests the Votanis Collective organized and turned on the Omec, starting the War of Six and pushing the Omec back to their planet, cutting them off from their food source.

They developed Protoform as a new form of sustenance and eventually created the Indogene, as both as food source and as a prey to hunt. They made them as wily and unpredictable as they could in order to make their hunts more exciting. Eventually the Indogene rebelled against the Omec and most of them fled to Daribo so the Omec developed control stems to dominate what remained. The Omec fought against the Volge who partially conquered their planet. After the discovery that the Votanis System was going to be destroyed, the Omec joined the Votans in building Arks to escape, however before launch the ships were infiltrated by Indogene shapetakers, sabotaged and destroyed.

A single ship, the Tsuroz, survived the destruction still with thousands of Omec aboard in stasis. The ship was commanded by T'evgin who along with his daughter Kindzi headed out into the galaxy to track down the Votans and seek revenge for what they did. In 1978 they entered the Gliese 783 System and picked up a radio signal from Earth and realized that the Votans must have gone there. They reached Earth in 2048 and went down to the McCawley Miness to procure Gulanite to bring their ship back to full power and revive all the Omec in stasis. T'evgin developed an appreciation of Humans and seeing the harmony the Votans had achieved, decided against taking revenge and wanted to move all the Omec to Australia.

Kindzi killed T'evgin and assumed the role as alpha, telling the other Omec that he was killed by the Votans. With the Tsuroz re-powered, she began to bring Omec down to Earth to hunt the citizens of Defiance. Dozens of Omec were killed when they were ambushed at their feeding area and a plan was developed to destroy the Tsuroz and prevent anymore from coming down. Kindzi followed them up and was killed in a fight with Joshua Nolan. Irisa Nyira was unwilling to go ahead with the plan to kill all the Omec aboard, including many children, however Nolan sent her off the ship. Nolan and Dr. Meh Yewll, who had bonded with the ships AI, activated the ships engines and took it out into the galaxy to find a new world for the Omec.

Retrieved from "https://aliens.fandom.com/wiki/Omec?oldid=194950"
Community content is available under CC-BY-SA unless otherwise noted.