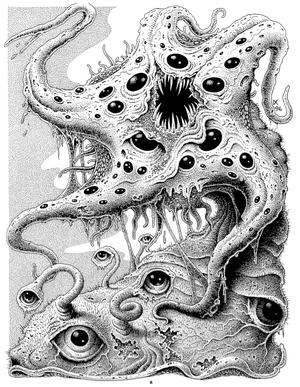 The Old Ones are an incomprehensibly evil Lovecraftian-like race of Eldritch titans in the Palladium Rifts Megaverse roleplaying universe. Beings whom are the personifications of chaos and evil.

No one knows from where the Old Ones came from or how long have they existed, perhaps since the beginning of the Megaverse. What is known is that they have ruled numerous worlds and dimensions for millions of years. They created magic or so some believe, and many lifeforms including the dragons and elves.

It was a reign of despair and sorrow, psychic empires in which the lesser beings were the playthings of the Old Ones. Eventually an alliance of ancient races formed in opposition against the Old Ones. What followed was an epic war, one which resulted in the doom of most of those races that had risen against the Old Ones. The greatest and most powerful of the Old Ones (Xy) was tricked by a fellow Old One and he disappeared. Which turned the tide for the rebels and eventually they defeated the Old Ones who were put in a state of sleep, imprisoned in the bowels of worlds.

The race of "Old Ones" have no set form, not even a generalized one. It's a race of beings with wildly different forms, all of them nightmarish abominations that violate the laws of biology and sometimes physics, and would cause most of us mortals to go mad upon witnessing their "bodies". Riotous combinations of slime, ectoplasm, flesh, eyes, mouths, teeth, limbs, heads, tentacles, and so on. They feed on the emotions of lesser beings, negative emotions being and the strongest and most intense are preferred.

The race has a wide variety of powers and abilities, and while not omnipotent their powers vastly exceed those of most mystical and cosmic races and entities. They are able to shapeshift, have near god-like psionic abilities, and either invented magic or developed it to what is recognizable today. Beings of such power, that if they were to be destroyed the cosmic energy released would be catastrophic which is why they were imprisoned. Even though they are slumbering, they continue to influence the sentient races and beings with their evil

Not all of the Old Ones were imprisoned. All of the "Alien Intelligences" of the Megaverse are actually Old Ones, including the The Dweller Beneath, the Lord of the Deep, the Splugorth, and the Vampire Intelligences. These Old Ones were insignificant being few in numbers and having a tiny fraction of the powers of the god-like Old Ones. Therefore they were either not seen as a threat by the ancient races or were exiled and though they threaten to varying degrees the worlds and interstellar empires of the Megaverse, it's nowhere near the degree of the great Old Ones.

Xy, The Great Old One
Add a photo to this gallery
Retrieved from "https://aliens.fandom.com/wiki/Old_One_(Palladium)?oldid=196869"
Community content is available under CC-BY-SA unless otherwise noted.