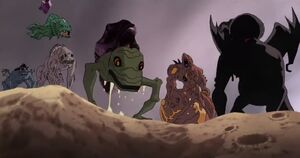 Justice League
The Old Ones are an eldritch race of demonic god-like monsters hailing from the extra-dimensional realm named Relex. They are ruled by Ichthultu.

The Old Ones are extradimensional creatures, extremely varied in terms of physical form; ranging from misshapen shapes to others that resemble ocean creatures: kraken-like forms with toothed jaws and spiked tentacles, as well as others more reminiscent of fish, sea serpents or crustaceans. Their powers are magical in nature, allowing them to harm even Kryptonians.

At the height of the Atlantean civilization, the Old Ones visited the Earth and posed a threat to Atlantis. King Poseidon forged his magical trident as a weapon powerful enough to seal the Old Ones back into their native realm, but at the cost of causing the entire city to sink beneath the waves.

The Old Ones enter the Earth's oceans through interdimensional portal

Ichthulhu the leader of the Old Ones

Retrieved from "https://aliens.fandom.com/wiki/Old_One_(DC_Comics)?oldid=187584"
Community content is available under CC-BY-SA unless otherwise noted.