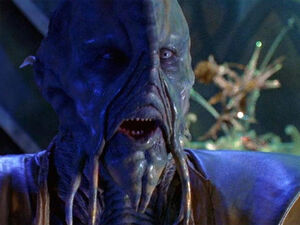 The Ohne are a semi-aquatic species from the Milky Way Galaxy in Stargate.

The Ohnes are a humanoid fish-like species. They possess blue cerulean skin with numerous barbels protruding from their face and sharp teeth. Ohnes are capable of having a lifespan that lasts five thousand years.

The Ohnes were attacked by the Goa'uld millennia ago, who conquered their ocean cities, bombarding them from orbit. After the main Goa'uld force left, the Ohnes launched a rebellion overwhelming the token force left on the planet.

The Ohnes are a caste-based culture, divided into two groups: Warrior Caste and Scholar Caste.

Retrieved from "https://aliens.fandom.com/wiki/Ohne?oldid=124868"
Community content is available under CC-BY-SA unless otherwise noted.