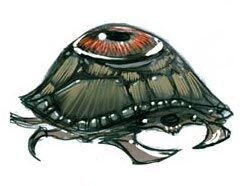 An Oculus is a small species indigenous to Tallon IV. Made up primarily of a huge eye, they can crawl up onto walls and generate a dangerous electrical field (presumably through the use of electroplaques) in an attempt to defend themselves from would-be predatory species. However, to do so they must expose their eye, located in the shell of their back. If a serious threat happens by, they can retract into their shell, which has proven to be impervious to conventional weaponry.

Oculi may be related in some way to the similar Eyons, and bear a physical resemblance to the Emperor Brug.

Known recorded locations for the Oculus are the Sun Tower and the Tower of Light, indicating that sunlight is very important to them.

Retrieved from "https://aliens.fandom.com/wiki/Oculus?oldid=169913"
Community content is available under CC-BY-SA unless otherwise noted.