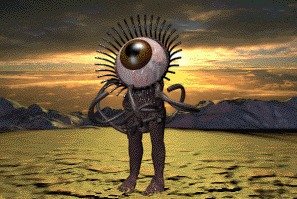 The Oculons have only the extremely acute sense of sight. They evolved on a thin-atmosphere planet orbiting a bright sun. Their culture is strongly astronomical (they are essentially living telescopes) and they have amassed a great deal of knowledge about the galaxy.

They are more mystical than intellectual, and are considered superstitious by other species. They are endlessly fascinated with space and with other forms of life. Without yet achieving space travel they have managed to communicate with other technological species from remote stars in this galaxy.

The average Oculon is obsessed with nobility of action and thought, and lives by a ritualistic code of honor.

You are the Jhitan, the Far Seer of the Oculons. The fulfillment of the Oculons' ancient longing is within grasp. From their long-distance communication with the civilizations of other worlds, your people now know that it is theoretically possible to construct vehicles that can explore space.
No Oculon is immune to the poetry of the stars, and your people are now obsessed with exploring space and seeing its wonders up close. You must guide them to develop the advances necessary to construct space ships. The wondrous sights and fantastic creatures of the universe await your people.

Super Astronomers: The Oculons are ancient astronomers. You can see all star lanes.