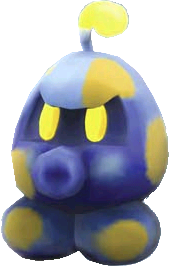 Super Mario Brothers
An Octoomba is a variant of Goomba that appeared in both of Mario's intergalactic adventures.

Octoombas are variants of Goombas that appear in many galaxies under the order of King Kaliente. However, unlike Goombas, they are blue with spots of yellow. They have glowing antenna and flipper like feet.

Retrieved from "https://aliens.fandom.com/wiki/Octoomba?oldid=181402"
Community content is available under CC-BY-SA unless otherwise noted.