Alien Species
Register
Don't have an account?
Sign In
Advertisement
in: Articles that Need to be Rewritten, Star Trek Universe, Humanoids,
and 4 more 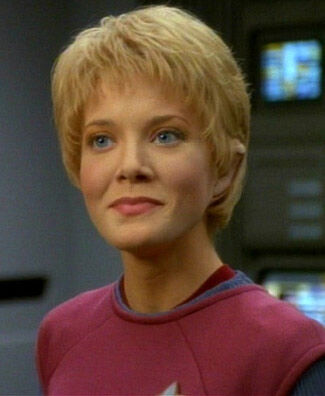 Star Trek
The Ocampa or Ocampans are a humanoid species who live on the planet Ocampa in the Delta Quadrant. Their early history is shrouded in mystery but their own legends tell of a time when they were capable of great mental feats. (VOY: "Cold Fire")

Some 500 generations before the 2370s, Nacene explorers from another galaxy inadvertently damaged the atmosphere of the planet Ocampa so badly that all nucleogenic particles were lost, thus rendering the atmosphere incapable of producing rain. The planet rapidly became a desert. The Nacene left two of their kind behind to "honor the debt that could never be repaid" to the Ocampa. The male Nacene, known as the Caretaker to the Ocampa, led the endangered species through tunnels into a vast underground city constructed especially for them. The Caretaker provided them with food, entertainment, water from subterranean sources, and power from the Caretaker's array nearby in space. The Nacene then sealed the Ocampa in using a force barrier. The Ocampa ruling Elders were subsequently charged with discovering the wishes of the Caretaker, who had become almost a deity to the Ocampa populace. The Ocampa remained in this state for 500 generations.

By 2371, a dissident movement had grown up among the younger generations of Ocampa. They moved out of the city and began to provide for themselves. They were fascinated by ancient stories stating that the Ocampa had once had extraordinary mental capacities. The Elders claimed that the stories were apocryphal, but the dissidents believed these mental powers had only become dormant after centuries of dependence on the Caretaker. In that same year, their reliance on the Caretaker was forcibly ended by the entity's death and the destruction of the array.

They had enough energy in the city's reserves to last until 2376 – then they would be forced to return to the planet's surface. (VOY: "Caretaker")

In 2072, the female Nacene, called Suspiria by the Ocampa, decided to leave her mate to seek out "more interesting places." She took several hundred Ocampa with her. Under Suspiria's guidance, these Ocampa developed their mental talents and created technology capable of increasing their natural life spans. Sadly, they also lost some of the Ocampa's native kindness, becoming arrogant and dangerous.

This is very similar to what happened to Kes as she developed her mental powers, implying that perhaps one is a natural result of the other.

Their encounter with the USS Voyager in 2372 did not end well. (VOY: "Cold Fire")

The Ocampa are humanoid and resemble Humans except for a few folds of skin around their ears. They are born without the ear folds, which grow when the infants grow older.

They age very rapidly, resulting in an average life span of only nine years. Consequently, they develop and learn extremely quickly. Most of their growth takes place in the first six months and by one year old they have reached a young adult stage. They remain in this stage for several years.

Between the ages of four and five, female Ocampa enter the elogium, the time of sexual maturation. During the elogium, a mitral sac forms on the back of the female. The sac accommodates a developing child, and it is from the sac that the child will be born as its mother stands upright.

The ipasaphor, a sticky yellow substance, appears on the female's hands for the six-day mating bond. Once the ipasaphor has appeared, mating must commence within 52 hours. (VOY: "Elogium", "Before and After")

Having remained young-looking for a number of years, they reach middle age sometime around their seventh year. Again their aging seems to stop, only to rapidly increase near their ninth year with the onset of the morilogium. At this stage of life the Ocampa move from middle-age to extreme old-age in the space of a few weeks, becoming confused and amnesiac before dying. (VOY: "Before and After")

It is interesting to note that the rapid development and aging is a dominant trait. It is found in half and even quarter-Ocampa. (VOY: "Before and After")

Ocampa have a body temperature of around 16 to 17 degrees Celsius. (VOY: "Before and After")

The Ocampa on Suspiria's array could reach the age of 20 years with the use of technology to prolong their lives. (VOY: "Cold Fire")

All Ocampa appear to be natural telepaths, able to communicate with members of their species and those of other species, as well. Among the more unusual mental abilities exhibited by the Ocampa were eidetic memory, precognition, telekinesis of varying strength, and the ability to sense and manipulate the subatomic level of matter. Tanis, an Ocampa living on Suspiria's array, demonstrated to Kes that she could control the life-force in living things, causing them to grow or die as she wished.

Tanis also told Kes that the Ocampa could join Suspiria in a subspace layer called Exosia, what he described as a realm of pure thought.

In early 2374, Kes experienced a rapid and uncontrollable blossoming of her mental abilities. Her body and everything around her, including Voyager, began to destabilize at the subatomic level. Kes left the ship and allowed this process to complete itself, apparently evolving into a being of pure energy. She could then move objects through space without need of conventional propulsion, and later exhibited the ability to travel through time.

In 2376, in the episode "Fury" of Star Trek: Voyager season 6, Kes returns to Voyager at 8 years old, using her powers to monitor the ship in distant space in a matter of seconds. She tries to use Voyager to journey back in time, and discovers that elderly Ocampas are powerful. The cerebral cortex of elderly Ocampas are able to develop temporal journeys and destroy everything in seconds, which is dangerous if there is no control between them.

The development of Ocampa mental abilities remains ambiguous. The Doctor speculates that Kes's transformation might be the result of exposure to Species 8472's telepathic influence, but this is not confirmed. There is a similarity between the powers Tanis exhibits in "Cold Fire" and those Kes has in "The Gift." One might speculate that the Ocampa are all headed for the same type of transformation as Kes if and when their mental abilities evolve far enough.

The Ocampa believe in an immortal soul, called the comra. They bury their dead, believing that the comra will move on to the afterlife. (VOY: "Emanations")

In the String Theory trilogy, The Doctor was sent into Ocampa's distant past by a Nacene who wanted The Doctor to prevent the birth of a Nacene/Ocampa hybrid that it perceived as a threat. During this visit, it was revealed that Ocampa sometimes receive residual memories from ancestors after they are born, their short life span making such a detail a valuable bonus. Kes, it would appear, is one such Ocampa, and it is revealed that she has told all she remembers to The Doctor prior to her departure from the ship. It was also shown that, in the past, Ocampa was a planet on a level similar to Earth in the Middle Ages, with a nobility-style system, but with certain military generals possessing powerful telepathic abilities.

To explain how the Ocampa population could be maintained despite each female only giving birth once, the Star Trek: Myriad Universes novella "Places of Exile" in Infinity's Prism suggests that twin and triplet births are common among Ocampa. In the acknowledgments, author Christopher L. Bennett credits Bernd Schneider's Ex Astris Scientia website for the idea.