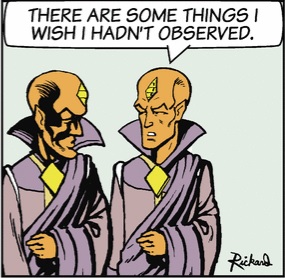 The Observers are (or at least fancy themselves to be) a phenomenally wise race of cosmic humanoids which have taken upon the task to observe all that goes on in the universe, but never allow themselves to interfere.

Retrieved from "https://aliens.fandom.com/wiki/Observer_(Brewster_Rockit)?oldid=140202"
Community content is available under CC-BY-SA unless otherwise noted.