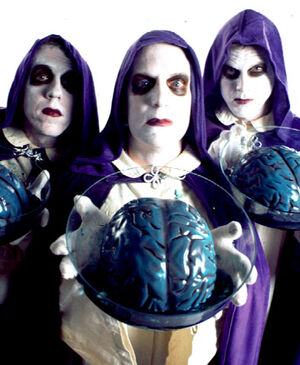 Mystery Science Theater 3000
The Observers are a species of pale-skinned extraterrestrial humanoids who claim to be omniscient, omnipotent and non-corporeal, supposedly having evolved beyond the need for physical bodies. The fact that they are still physical entities, as obvious as it seems, is always overlooked or denied by them.

They are always seen carrying their blue brains in a bowl containing a similarly blue liquid. It is possible that these are in fact their brains, and they operate from outside their empty bodies as they claim - the body being used as a simple "brain carrier" or mindless servant; although some have noticed the pointlessness of having evolved in such an impractical way, as it would have been much easier to simply remain within their bodies.

However, it would also be feasible to assume that their real brains are actually still inside them, and their belief of being non-corporeal entities causes them to carry their so-called brains around in transparent shallow bowls. Whether the bond to their brains is real or psychological, it is known that some bond exists, as any damages suffered by the brain will have an effect on the Observer as well. Their psychic abilities appear to be real, anyway, as Brain Guy is often able to send terrible movies to the Satellite of Love using his mind power.

Like Marklars and Mattresses, all individual Observers share the same name: Observer. After the Observers' homeworld was accidentally destroyed by Mike Nelson, the last member of the species ended up joining the Mads (along with Pearl and Professor Bobo) and became known by the nickname Brain Guy.

Observers seem to believe other lifeforms to be inferior to them and are often planning to study or dissect them. However, in at least one occasion where the Satellite of Love crew was tested by an Observer to see if they had enough IQ to become one of their kind; the robot Tom Servo actually scored higher than the Observer himself; causing Observer to be severely punished by the others.

Retrieved from "https://aliens.fandom.com/wiki/Observer?oldid=198779"
Community content is available under CC-BY-SA unless otherwise noted.