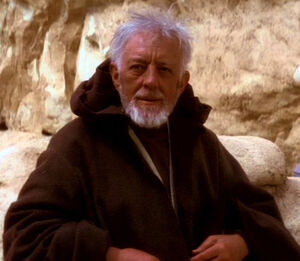 "Help me, Obi-Wan Kenobi. You're my only hope."
―The last line of Princess Leia's recorded message to Kenobi, Star Wars.

Obi-Wan Kenobi was a Jedi Master who trained Anakin Skywalker, and later his son, Luke Skywalker. He fought along his first apprentice in the Clone Wars and, along with Yoda, was one of the few Jedi that managed to escape into exile when the Galactic Empire was formed under Emperor Palpatine, who ordered the extermination of the Order. In his later years, he lived as a hermit on the desert world of Tatooine, under the name "Ben Kenobi".

When Princess Leia's ship was captured by the Imperial forces while transporting plans of the Death Star intended to be given to the Rebel Alliance, Leia decided to hide the plans inside the droid R2-D2 and recorded a message for Kenobi, claiming he was her only hope of delivering the plans to Alderaan in safety. In order to find Kenobi and escape from the clutches of Darth Vader, R2 ejected himself in an escape pod, along with fellow droid C-3PO, and crash-landed on the nearby Tatooine. Both droids ended up captured by Jawa merchants and sold to Owen Lars (coincidentally, one of the few men aware of Ben Kenobi's real identity and past). The message ended up being found by Owen's step-nephew, Luke Skywalker, who assumed that "Obi-Wan" might be a relative of the old hermit Ben.

Afterwards, R2 left in the middle of the night to try to reach Obi-Wan and complete his mission. Luke and C-3PO went after them, but were soon attacked by Tusken Raiders and saved only by the timely arrival of Kenobi himself. After seeing the message, Kenobi revealed his true identity to Luke and the droids and presented Luke with a lightsaber that had belonged to Anakin. They later hired smugglers Han Solo and Chewbacca to take them to Alderaan aboard the Millennium Falcon.

As it turns, out, however, Alderaan had been destroyed by the Death Star, and the party ended up entering the station, where they managed to rescue the Princess. Obi-Wan engaged in combat with Vader to give time to the others to escape and willingly allowed himself to be killed by Vader's lightsaber. His body disappeared immediately, and he became a Force ghost: a form that Kenobi knew would be more helpful in the future as he could communicate with Luke at any moment the latter needed him. He communicated with Luke non-corporeally during the Battle of Yavin and told him to trust his instincts, allowing him to hit the Death Star's only weak point and annihilate the station.

Retrieved from "https://aliens.fandom.com/wiki/Obi-Wan_Kenobi?oldid=191324"
Community content is available under CC-BY-SA unless otherwise noted.