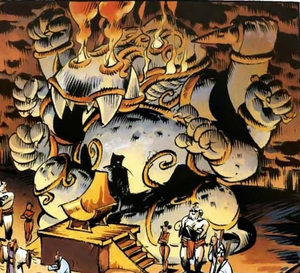 Nymethny was a Darshan God in the Lanfeust of Troy Universe.

Two hundred years before the start of the series, Nymethny was a god worshiped by the Nymethny Cult. Despite his worship, he was unable to fully manifest for centuries. Eventually he managed to communicate with his followers via a sacrificed White Darshanide Troll to complete a ritual to make him fully ascend. His followers used the trolls of Darshan to give up their children to become Tronlzes, who were supposedly Servants of Swoog but in actually just slaves to Nymethny.

One of the requirements to the ritual was a Red Troll. Lady Meshanta following his orders sough the capture of a Common Forest Troll from other side of the world. Unfortunately the troll escaped thanks to his family, rescuing hundreds of white baby trolls that were to be sacrificed for a ritual coat. Nymethny body was brought to life using fire, but when presented with sacrifices to eat he found he could not taste their flesh. He realized the ritual was not complete and became angered as Lady Menshanta, his main follower used a coat made from an adult troll. Angered he sensed that the true baby trolls were near and sought them out himself.

He chased Tetram and his friends throughout Nouhungkung. Toro the Troll aided Wawa in summoning Swoog to challenge the god. Swoog enraged at Nymethny treating his fellow trolls he used his voice to call out all free trolls that they had been misled as he never had any priest. Hearing this throughout Darshan, the conspirators were killed for their treason. The two gods soon began to engage each other however both were equally match and Toro had Tyneth gather water and pour water on Nymethny weakening his fire empowered body allowing Swoog to shatter him.

Turning his attention to the Tronlzes he swashed them under his foot in anger and eat the rest. Satisfied he offered to drop Tetram and his family with his sky chariot. He later transported the white troll babies back to their parents.

Retrieved from "https://aliens.fandom.com/wiki/Nymethny?oldid=146938"
Community content is available under CC-BY-SA unless otherwise noted.