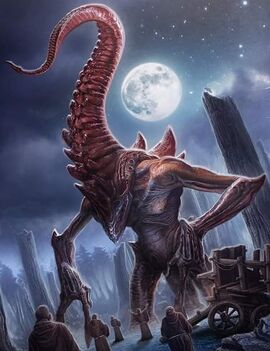 Messenger of the Outer Gods

H. P. Lovecraft
Nyarlathotep, also known as the Crawling Chaos, is the sadistic eldritch deity and manipulative messenger of the Outer Gods. He is one of three children born of the primordial Azathoth.

He has numerous avatars that he may assume when walking among other races, including a lean, sinister Egyptian man who operates as a traveling showman, exhibiting his strange abilities. Like Cthulhu, he can manifest himself in the dreams of Humans, provoking nightmares.

Call of Cthulhu RPG rulebook, fifth edition
Add a photo to this gallery
Retrieved from "https://aliens.fandom.com/wiki/Nyarlathotep?oldid=199447"
Community content is available under CC-BY-SA unless otherwise noted.