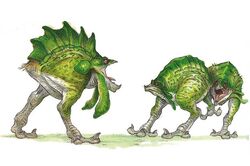 Star Wars
Nunas are small, non-sapient bipedal creatures native to the planet of Naboo. They have two legs with three toes on each foot. There are at least two known species of Nuna: the Dwarf Nuna is about the size of a chick of the common Nuna. They have been exported to many other worlds to be hunted for food and for sport. They are used as balls in a Gungan sport called Nunaball, similar to how Gullipuds are used in Gulliball, which later became popular on other planets. Nuna racing is also frequently practiced on some planets.

The fact that young Nuna are called chicks and that Nunas themselves are classified as reptilians might indicate that they descend from volant ancestors. Them again, it might be just because they resemble Earth's poultry, namely chickens.