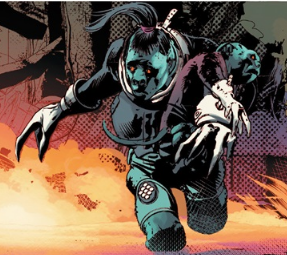 The Nullans are a peaceful race of monks from the planet Nulla.

The Nullans are a humanoid race hailing from a world that is said to rival their species beauty. They are green skinned, faces similar to gorillas, elephantine legs and long arms ending with long three fingers.

The Nullans were attacked by Thanos the Mad Titan, who sought a cure for himself of the God Cancer. However when they could not provide him one he slaughtered the monks to show his displeasure.

The Nullans are a monk-like race, dedicating their lives in living perfectly in harmony with nature. Their planet is filled with many medicinal plants and herbs, making their species renowned for their knowledge in medical science and healing. Knowledge is passed orally from elder to students. Once an elders grows weak, the young nurse them to the next life, burying them in the earth to be absorbed into the soil and be reborn.

Retrieved from "https://aliens.fandom.com/wiki/Nullan?oldid=168805"
Community content is available under CC-BY-SA unless otherwise noted.