Alien Species
Register
Don't have an account?
Sign In
Advertisement
in: Ben 10 Universe, Races of the Milky Way Galaxy, Sapient Species,
and 13 more 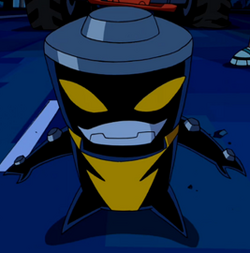 Black with yellow markings (traditionally)
Various others (varies by individual)

Nosedeenians are black anthropomorphic battery-like aliens roughly a foot tall (~ 30 cm) with plus and minus symbols on their backs, pointy legs, three-fingered hands, and markings on their chests that resemble lightning bolts.

As they are composed of electricity, Nosedeenians can fire beams of electricity powerful enough to harm Humans, Tetramands, Galvanic Mechamorphs, and Xerge. This electricity can come in different colors, such as yellow, green, and mint green.

Similar to Conductoids, Nosedeenians can absorb and control electricity. Similarly, they can inhabit electrical devices and commandeer them from the inside.

Nosedeenians can multiply by either splitting in half or obtaining enough power. However, they must first learn how and train themselves in order to do so.[2]

Nosedeenians are surprisingly strong for their size, being able to lift a Human at least by their underwear.

Nosedeenians are quite agile, being able to avoid a hybrid Terroanchula's attacks and land on their feet.

Nosedeenians are durable enough to withstand a Sotoraggian's blaster fire. Their natural durability increases through the use of their self-duplication powers.

Nosedeenians can fly seamlessly in the air and leave an electric trail while doing so.

Nosedeenians can electrify liquids to attack enemies, such as a Sphoeroid's slime.

Similar to Sonorosians, Nosedeenians can emit a sonic scream capable of shattering glass.

Being made from electrical energy, Nosedeenians are weak against water and other resources that ground it.

Nosedeenians are powerless against insulators and non-conductive materials, such as fire and rubber-sheeted blankets.

Noosedeenians are vulnerable to a species that can absorb electricity, such as Conductoids, Fulmini, and hybrid Terroranchulas. If they run out of energy, they will fall asleep.

There is a limit to a Nosedeenian's durability, as they can be knocked out by enemy attacks.

Like other organic beings, Nosedeenians can be banished to another timeline by a Chronosapien.

A Nosedeenian's size can put them at a disadvantage against larger opponents such as hybrid Terroranchulas and golems made of Xerge.

Nosedeenians exist to have "fun", which in their case is to cause trouble wherever they go. While they cause a lot of damage, they do not seem to be hostile, and only openly attack when provoked.

Nosedeenians mostly communicate with high-pitched squeaking and chirping noises. Certain members are capable of speaking English, albeit in varying forms. Some speak with an electric filter while others sound like a Human who has inhaled helium. 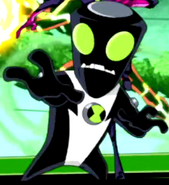 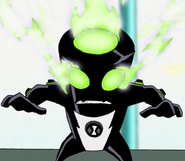